You are at:Home»Blog»5 Bad Habits That Experienced DJs Grow Out Of

Being an experienced dj comes with a lot of hours behind the deck mixing and play at big shows or private rehearsals at home. There are a lot of bad habits that an experience DJ would grow out of like over-using FX or boosting the low EQs to max.

This article is credited to DJ Tech Tools as they share insight from their community about the bad habits that DJs have stopped doing with experience.

This might be the most commonly suggested bad habit that DJs learn that they need to stop doing as they move beyond the beginner phase of DJing. Effects are a great way to add a splash of excitement into a mix – but new DJs will often blast FX nonstop into their mixes. It might be fun in the moment, but re-listening to set recording with excessive FX use is a great way to realize how bad it can sound.

Franco also raises a second point – doing the same style of effect over and over in the same set can be just as bad. This can become really noticeable if it is a non-subtle effect (like roll/beatmasher or filter sweeps) used in the exact same style throughout the set.

2) Playing All The Best Tracks First

Making a splash and holding your audience is critical in almost any type of performance. For DJs it can be especially challenging because crowds at a nightclub are non-captive (in comparison to, say, a ballet with a seated, respectful audience). People will come and go – so when you play out, it is tempting to do everything possible to keep the crowd’s attention at the start.

What this means practically is not to play every banger and floor filler that you’ve pulled for the set at the very beginning. Instead, create a flow and program a DJ set like you might tell a story. Even if you’re playing top 40 tracks, consider saving some of the best hits and remixes that you’ve uncovered for the final 20 minutes of your set – and leave the crowd wanting more when you’ve finished! Don’t explode every firework at once like in this hilarious (but warning, loud) fireworks show in San Diego a few years ago:

3) Planning Every Track and Mix

When starting out, you might not have the biggest collection of music you actually want to DJ with. You also might have found just a few tracks that mix well together or that you like to transition between.

These factors can make it very tempting for beginner DJs to plan – down to the minute – every track and mix in their DJ sets. It’s great to be prepared, over-planning can mean forgetting to leave room for creativity, improvisation, and adapting to the crowd. 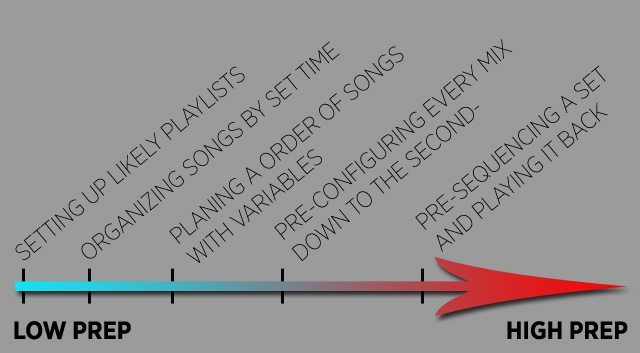 Most experienced DJs report that they instead try to strike a balance between both worlds – bringing a few planned mixes but not mapping every single mix and track out.

EQ knobs are fascinating to new DJs – big room festival DJs often look as though they are cranking on these knobs with reckless abandon. But with a bit of experience, it quickly becomes clear that EQ knobs should be used more as precision tools to make blends sound amazing.

One of the biggest EQ misconceptions is that boosting frequencies past 12 o’clock is something that needs to happen. Usually, every track has already been mastered and carefully balanced. To get great bass response, don’t keep turning up the low-end knob, but instead consider investing in a better subwoofer.

DJ Tech Tool got a number of responses from DJs who shared that since they’ve become more experienced DJs, they’ve reconsidered what substances they regularly imbibe. Alcohol and drugs can have a dramatic effect on a DJ’s:

Touring artists report an even bigger challenge: alcohol is such a part of nightlife culture that it can be hard to abstain – but drinking at every gig would be an incredible health hazard if you’re playing out 3-5 nights a week.