You are at:Home»News»Davido Reacts As Comedian, Funnybone Shades Him For Helping Cynthia Morgan

Davido had the perfect response for Nigerian Comedian, Funnybone who threw shade at him for trying to help Cynthia Morgan.

Cynthia Morgan’s story of how her career was destroyed by Jude Okoye, her former record label boss got the attention of everyone, and Davido was one of them. Despite the dancehall singer calling him a F@ck boy years ago, Davido extended an olive branch by offering to be on a song with her. Later, both singers announced that their collaboration was already in the works.

However, Funnybone found it strange that no one reached out to her all these years. He then took to his Instagram story to share his opinion about people reaching out to Cynthia Morgan. He wrote: “How come nobody asked after Cynthia Morgan all these years? Even the colleagues she had something with. Suddenly everybody is now shouting Cynthia call me call me, Las las we are all on our own o, God I dey your hand oo. Amen.” 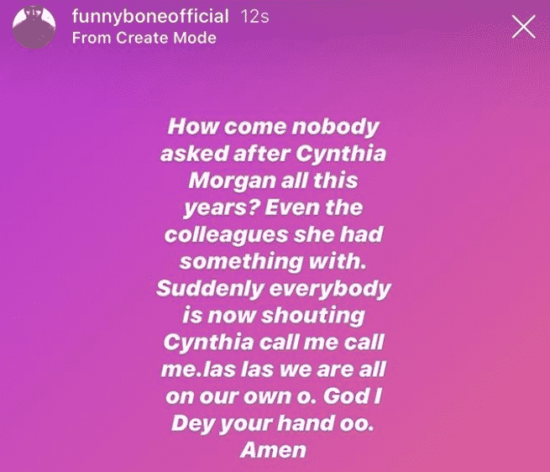