You are at:Home»News»Mayorkun Gearing Up For A New Music with Focalist

Mayorkun Gearing Up For A New Music With Focalist

Nigerian Singer and DMW music act, Mayorkun is prepping for the release of a new song with South African artist, Focalist.

Mayorkun made the revealation via his instastory indicating that something is up.

In the short video clip on instastory, South African Singer Focalist was seen recording the vocals for the song in the studio while, the Nigerian singer observed close by.

Mayorkun had simply captioned it “The Clip” 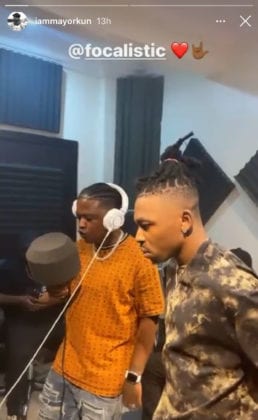 The DMW act has also given a sneak peek of what’s to come in terms of the release of the remix of his latest single “Kilofeshe” featuring Marlian records signee Zinoleesky.

It’s a month filled with a torrent of anticipations as many big acts are in the studio cooking up one thing or the other.