You are at:Home»News»Sean Tizzle Gears Up to New EP “Where You Been”

Sean Tizzle Gears Up to New EP “Where You Been”

Ace and veteran Nigerian singer, Sean Tizzle is cooking up an EP and he calls it “Where You Been”.

The singer who has been under the radar for a while is set to resurface with a new EP and with a question-kind of title which can be easily reversed to him ‘Where You been’.

The singer revealed this on his Instagram page and also went ahead to disclose the track list of his forthcoming EP.

According to the information shared by Sean Tizzle on February 10, via his Instagram handle, the EP he is cooking is ready and is set for consumption on the 14th of February, 2021.

The singer also revealed that Haitian rapper, singer, and actor, Wyclef Jean is the only artist that is featured on the project.

The project consists of four tracks which were mixed and produced by various legendary beat makers like Finito, Steph Keyzz, Wyclef Jean, Dera, and K.O

He appreciated everyone who worked behind the scenes on the success of his latest body of work.

S/O to @stephkeyzz watch out for this young chap peeps !!! Thanks for Track 2 “FOR ME” ft Wyclef Jean you’re a young Legend God Bless you.

S/O to @deratheboy @beatssbyko hmmmm CHARGIE ! International sound !! Both of ya are Geniuses !God bless you.

S/O to @Officialtimijay For the mixing&mastering pure clear sounds !!!
God bless you

S/O to @headsmusic for the incoming journey God bless you 🙏 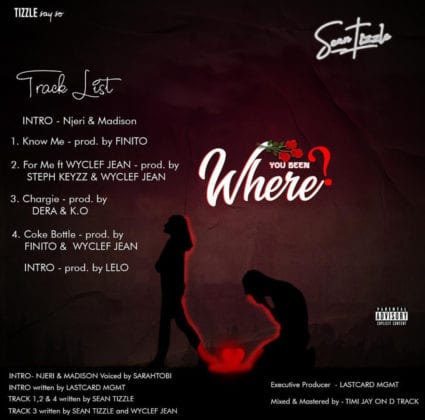